How Low Could Stocks Go? 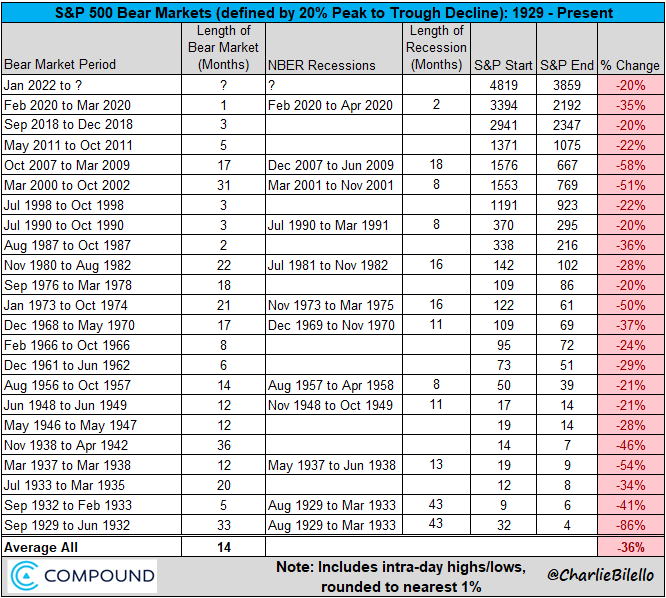 Stocks have had a rough start to the year. The S&P 500 briefly entered bear market territory intraday on May 20th, down 20% from highs. Tech stocks and the Nasdaq index have been hit even harder. So just how much farther could stocks fall? Based on historical bear markets and the fact the market remains extremely expensive at today’s valuation levels I think that significant downside remains. In this post I’m going to look at past bear markets and valuation levels to see what kind of losses we might expect in this current downturn.

As the table below from Charlie Bilello shows, the average bear market in the US has resulted in a loss of 36%. They range from down 20% all the way to down 86%. Bear markets that occurred during recessions averaged a peak to trough decline of 42%. Bear markets without recessions have averaged a 29% decline. The largest drop that occurred outside of a recession was the loss of 46% the market experienced as the world entered World War II.

It remains to be seen whether the economy will go into recession following the current drawdown. Given some of the factors I’ve pointed out in my past couple quarterly climate updates, I think it’s likely. Either way, the market still has a significant way to fall to reach the average bear market drawdown.

Even with the 20% decline this year, the US stock market is still very expensive relative to history. Based on the Shiller PE ratio, the stock market is at valuation levels only seen in the bubbles of 1929 and 1999.

What if the market were to have an extreme drop? All time lows on the Shiller PE would put the market at a multiple around 5. That’s a stunning drop of 84% from current levels. Even I would be shocked to see the market have such a massive loss, but it’s worth pointing out that the market has been there before and seen such a massive drop before as well during the Great Depression

The worst bear market in US history came during the Great Depression. The Dow Jones Industrial average lost nearly 90% of its value. Imagine buying the stock market when it’s down 80% only to see your investment get cut in half. That’s what happens to a market that goes down 80% on its way down to a loss of 90%.

The S&P lost roughly half its value when the tech bubble burst while the Nasdaq lost nearly 80%. There are some savvy market veterans who’ve drawn a lot of parallels between the tech bubble and the current market.

The most recent major market crash came during the Global Financial Crisis. The US stock market lost 57% from 2007-2009:

I think the stock market is in for a lot more pain before it bottoms. If we have an average loss seen during a recession then the market would need to fall an additional 20%. The extremely expensive valuation level in the stock market is what I find most concerning. Market corrections that have occurred from extreme valuation levels in the past have resulted in losses between 50-89%. Even on the low end that would mean the market would drop over 30% from current levels.

I think this market drop has been painful since it has come relatively quickly and many were taking excessive levels of risk. That being said, I think there is a lot more potential downside ahead and investors should be cautious.