Is the Seattle Housing Market in Another Bubble? 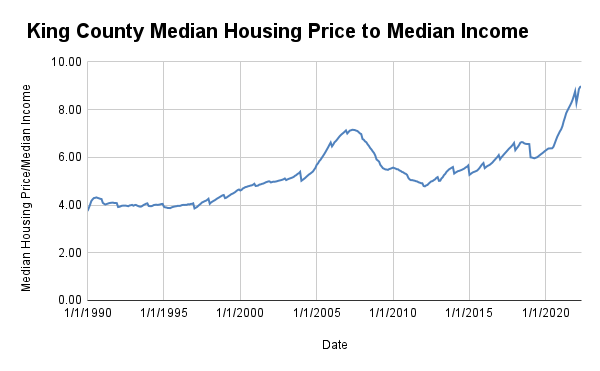 Homes in the greater Seattle area are now more expensive than at the housing bubble peak in ‘06-’07. Soaring home prices over the past year pushed the ratio of median housing price to median income to new all time highs in Seattle and King County: 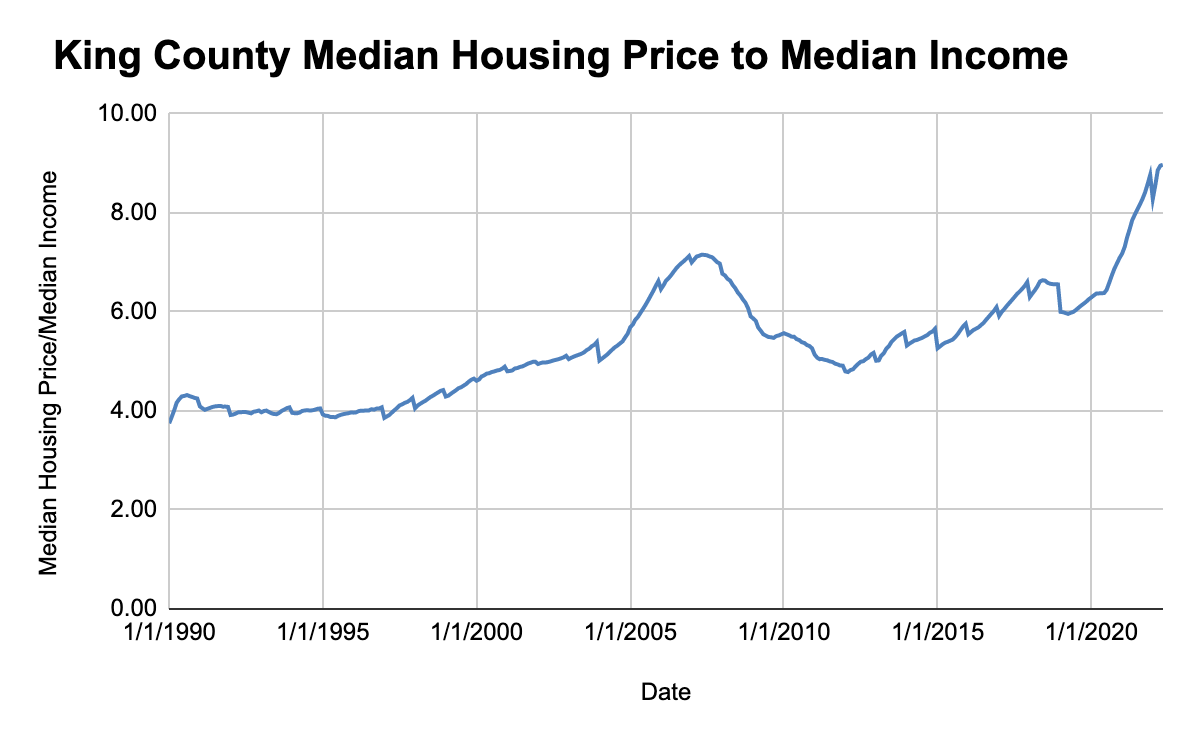 This means the average house now costs nearly 9X the average income in the Seattle area, compared to a peak multiple of around 7 during the housing bubble. The trend in Seattle mirrors the nationwide trend in housing. The following chart from Longtrends shows just how expensive housing has gotten nationwide in the past year:

It’s stunning to see housing surpass its bubble peak both locally and nationwide. However, the actual affordability might not be quite as bad as the above charts indicate. Taking into account mortgage rates, housing still looks expensive in the Seattle area but is not as expensive as it got during the bubble peak. The following chart from Seattlebubble shows the affordability of King County housing:

Note that the above affordability chart was posted in March so it’s likely much less affordable now as housing prices continued to increase and mortgage rates skyrocketed. Here’s a look at the change in mortgage rates:

Unless (or until) we go into recession I expect interest rates to remain high, which should keep mortgage rates elevated compared to recent years. A recession may help homebuyers as I think there’s a high likelihood home prices would fall. Housing downturns aren’t as common as bear markets in the stock market, but they certainly do appear from time to time:

I’d like to point out that real estate is often much more than just a financial decision. The fact that housing is now more expensive than the bubble peak means caution is warranted. I’d encourage those considering ‘reaching’ for a home at the high end of their budget to reconsider. Investors and those with rental properties should pay particular attention to the current elevated prices. I’m hopeful that a recession will bring us into a more ‘normal’ housing environment with more affordable housing prices.

If you want to discuss your financial situation, schedule a complimentary call today.